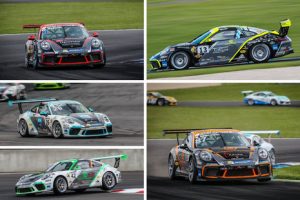 Last weekend, the second round of the Porsche Carrera Cup Germany took place on the Lausitzring. Our partner raceunion Huber Racing started again with 6 vehicles and was able to achieve some podium finishes. In Saturday’s race Michael Ammermüller succeeded in the third podium place in a row. Ryan Cullen and Henric Skoog finished at position 12 and 13. In the B-class, Wolfgang Triller celebrated his second win of the season. Wolf Nathan also finished on the podium in the B-class.

In the second race, raceunion Huber Racing missed a podium for the first time in this season. Michael Ammermüller was overtaken by the championship leader Dennis Olsen, shortly before the end of the race. The two rookies Ryan Cullen and Henric Skoog finished on 11th and 9th position. Wolfgang Triller was very fast again and secured with position 2 the championship lead in the B-class. Also guest starter Matthias Jeserich proved his ability with position 3 in the B-class. The next round of the Porsche Carrera Cup Germany will take place from 9th to 11th June at the Red Bull Ring in Austria.
Tags: Porsche Carrera Cup Deutschland,, raceunion Huber Racing

BACK TO NEWS INDEX